Stories by Rabindranath Tagore - Where to Watch?

Yay! The show is available for streaming online and you can watch Stories by Rabindranath Tagore on Netflix, Hotstar, hoichoi.

The characters of Tagore’s stories spring into life through the cinematic imagination of acclaimed filmmaker, Anurag Basu in ‘Stories By Rabindranath Tagore’. ‘Stories By Rabindranath Tagore’ shares with us the intricately etched characters created by the master himself and brought onto the small screen by the visionary director of ‘Barfi’ and ‘Life in a Metro.’ Set in a politically volatile period, the stories are constantly shifting in the social world of the early twentieth century in undivided Bengal. The hub of new India, Calcutta is the melting pot where our protagonists are pouring in from their rural, social and cultural spaces to encourage this upcoming new world. Tagore, the most articulate feminist of his times, saw his women as intelligent, adventurous, chance takers and almost always resisting the family and the social establishment. Unlike ordinary characters, these personalities pack a rebellious punch. They break the traditional paths and root themselves into our hopeful hearts. We fight alongside them as they break out from their socio-religious confines. The audience, in our times too, will find this world engaging as well as challenging; feeling attached to their emotions, issues, drama and anxieties. Basu retains Tagore’s narrative style even in the visual medium and enhances the words of his pages by casting talent that truly captures the essence of each of his beloved characters. He delves deeper into this society in transition, with songs, music, cultural references and its newfound political and social expressions, a little more than the actual described world within Tagore’s narratives. Tagore’s words and Basu’s vision have amalgamated into a show that transports you back in time to a world as complicated as this one but with far more appeal and beauty. 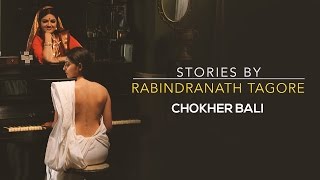